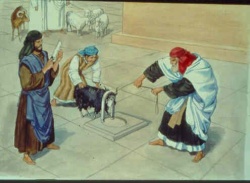 Parashat Vayikra - On the Essence of Sacrifices

The vital importance of sacrifices as an integral part of the spiritual existence of the Nation of Israel is well known. The abundant Torah chapters that discuss the various aspects of sacrifices are adequate evidence of their great significance. How do we explain the large gap between the Torah's reverent approach to sacrifices, and the critical attitude of the Prophets? Why did the sacrifices drop from its exalted position of holiness and importance, to such a low during the period of the Prophets?

The Torah details at length the conversations between the Patriarchs and the Matriarchs regarding their children. There appears to be a tremendous difference in their approaches: While Sarah, Rivka and Rachel display very intense longing for offspring, for their husbands Avraham, Yitzchak and Yaakov this matter appears to be much less of a major priority.

Parashat Toldot - The Blessing of Avraham

At the end of Parashat Toldot, Yitzchak summons Yaakov, almost secretly, and warns him not to marry a Canaanite woman (28,1). Instead, Yaakov is to go to Padan Aram and make sure to take only a daughter of Rivka's family for a wife. Yitzchak then gives Yaakov yet another blessing – the very one that he had refused to grant Esav: Birkat Avraham, the Blessing of Avraham, encompassing the most basic elements of the G-d-Israel relationship. Given first to Avraham, and then to Yitzchak on his way to Gerar, it is now passed on to Yaakov: וְיִתֶּן לְךָ אֶת בִּרְכַּת אַבְרָהָם, לְךָ וּלְזַרְעֲךָ אִתָּךְ, לְרִשְׁתְּךָ אֶת אֶרֶץ מְגֻרֶיךָ אֲשֶׁר נָתַן אֱ-לֹהִים לְאַבְרָהָם. May G-d grant you the blessing of Avraham, to you and your descendants with you, to inherit the land of your dwelling that G-d gave to Avraham. (28,4)